Don’t be Afraid to Listen 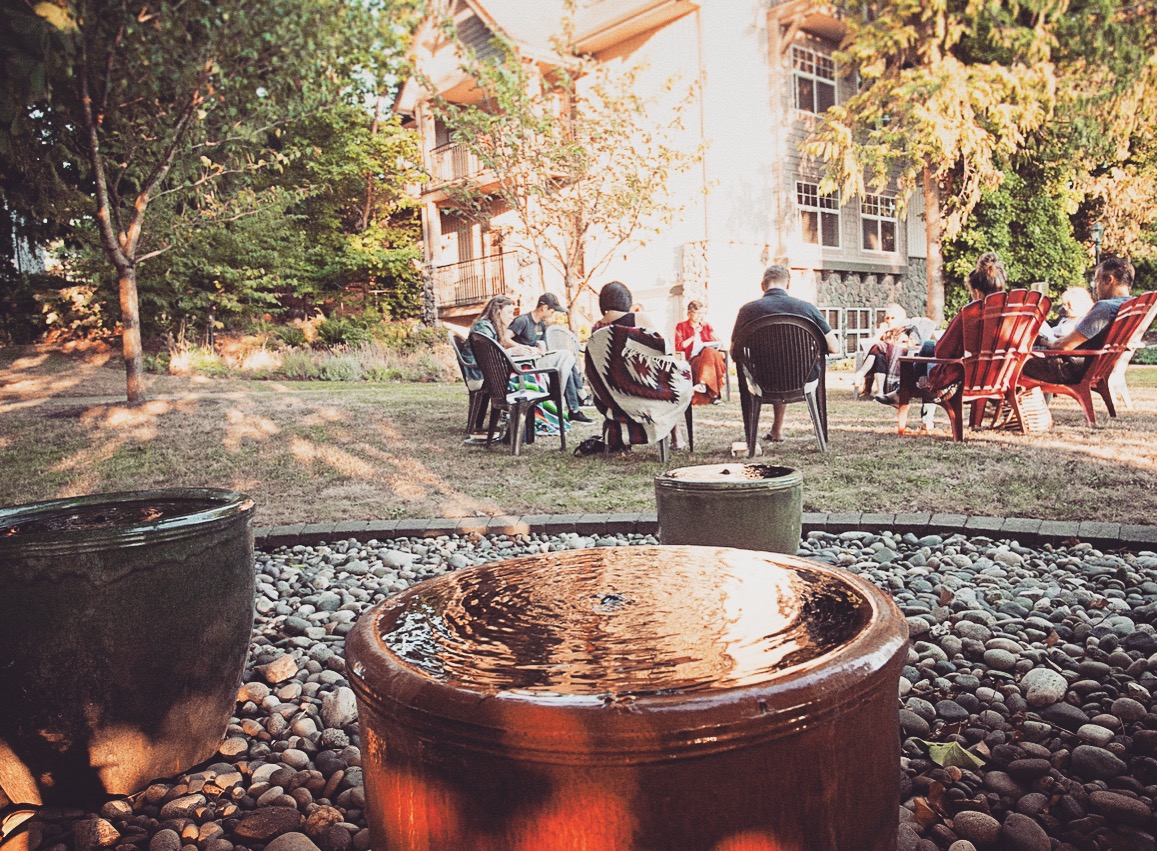 “God has been gradually drawing me to the practice of lectio divina over the course of this past year. My first experience in reading the Scripture this way was an assignment for a lay leadership course that I am taking. At that time, we were simply handed a piece of paper with written instructions on it rather than being led through the passage by someone who had done it before, so when I saw on Facebook that the Mark Centre was offering a three-evening Summer Lectio Series I jumped at the chance to participate.

The second evening that we met, we read John 2:1-11, the story of Jesus changing water into wine. It was a beautiful evening for such a reflection. Steve set chairs outside near the fountain feature designed expressly to portray the six urns in the biblical story. We settled into our chairs and snuggled under blankets to ward off the cool of the evening.

As Steve led us through multiple, slow readings of Scripture, to the point of focusing on a particular word or phrase that was speaking to us, I found I had a hard time doing so. Instead, I found myself comparing the similarities between this passage and one we had read the previous week. In essence, I allowed my thoughts to stray into more of a study mode than one that was personally reflective, and I justified it to myself, and to the group, as being where God had led my thoughts that night. But after I got home that evening I realized that what I was actually doing was avoiding reflecting on a phrase that had jumped out at me, quite strongly, which was “do whatever he tells you” (John 2:5).

Once I realized this, I did a number of things. First of all, I got up the next morning and immediately started the process of becoming a volunteer at a local community agency (something God had been speaking to me about since April but I had been “putting off” until after the summer). I then spent most of the subsequent week quietly reflecting on those words and my avoidance of them. And, finally, I sat down and redid a lectio reading and meditation of that passage and of those words.

I have been through a process of inner healing over the past five years, and one of the things that has become apparent is how much anxiety has been a part of my whole life. Most of my life has been spent covering up and avoiding those anxious feelings. But God has been stripping away those coping mechanisms and in the process the reality of my anxiety has become more apparent. As I prayerfully meditated on the words “do whatever he tells you,” I began to see that my anxiety controls my actions. I have to work hard to push past it, even in the action of bringing myself to practice lectio divina. Like some of you, I am sure, I find it hard to bring myself to the point of actually sitting down and spending time with God. Lectio divina happens in solitude and silence and being in that position exposes my anxiety. Also, anxiety keeps me from spending time with God because I am not sure what will happen and where he might lead. It feels safer to maintain the illusion of control rather than to open myself up to God leading me someplace that might be challenging or scary (like a new volunteer position).

As I prayed about this I began to see that rather than anxiety keeping me from God, I need, instead, to bring my anxiety to God and turn to him for peace, solace, and healing. God wants to be a place of safety, not a place where my anxiety increases. The One who turned water into wine is the one who has the power to calm my anxiety and give me strength to face each day. In God will I find peace (Philippians 4:6,7). It is becoming clear that God is drawing me to the practice of lectio divina precisely so it becomes the avenue where I bring my anxiety to God, listen for his response, feel his presence, and move forward into my day.“