Let Me Restore Your Soul 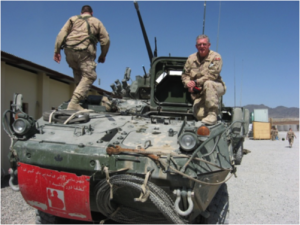 On Wednesday June 4th 2014, Steve Klassen guided a morning retreat during a residential of my Arrow Leadership executive class. About 30 of us were together in the peaceful setting of Barnabas on Keats Island. The ocean and majestic mountains of British Columbia were our daily panorama.

Steve shared some great insights and stories on “listening to God”. As we listened our hearts were stirred with anticipation of what we would hear from God. Just prior to sending us off to spend some time alone with God, he handed us Psalm 23 to help us in our mediation.  Of all the passages in the Bible, why did he have to choose Psalm 23?  As I read the first line, my eyes got watery and a deep sense of grief invaded my soul.

I served 20 years as a chaplain in the Canadian Armed Forces and during 2007-2008 I spent two Christmases and 12 1/12 months in Afghanistan. Two triggers that remind me of the horrors of war are Psalm 23 and the song Amazing Grace.

Every time I hear Amazing Grace on the bagpipes I’m immediately transported back to those 14 ramp ceremonies where we sent home our 17 “fallen comrades”.  As Steve called us back together after our time alone with God he happened to choose Amazing Grace to play on his trumpet. As for Psalm 23, that’s the Psalm I read over the body of every dead soldier before I prayed for the family who was learning of the death and entering not the “shadow” but the actual valley of death – “Even though I walk through the valley of the shadow of death, I fear no evil”.

I could identify with their pain, because when I came home in May 2008, I told my wife “a part of me died in Afghanistan”.  About 18 months after returning to Canada and struggling with a few issues, I decided to meet with one of our psychiatrists who after listening to my story said:  “Padre, your soul died in Afghanistan”.  Finally, I had found someone who could explain with words the pain I was feeling. The pain lingered as I realized that a part of my soul remained not in the “shadow” only, but in the valley of death.

War had given this Psalm a new meaning for me.  As I read Psalm 23 in Afghanistan, I realized that it never says that one ever leaves “the valley of the shadow of death”.  It simply says “I fear no evil” for God is with me and it ends with “dwelling in the house of the Lord for ever”.  So does that mean that my deliverance will come only in eternity?

As Steve sent us out to find a quiet place with God, I immediately went to the privacy of my room because I was overwhelmed with grief and wanted to cry alone.  My time started with me questioning God – “Why this Psalm?” Kneeling at the edge of the bed, and after reading the Psalm several times, “he restores my soul” caught my attention.  I read that verse again and again and suddenly I felt God tell me “It’s time to come out of the valley of death. I will restore you”.  The grief was suddenly replaced by a sense of peace and inner healing as I reflected on those simple words “let me restore you”.