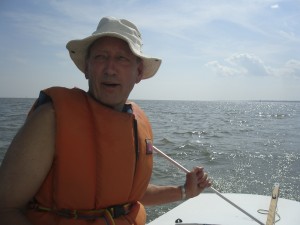 It was a sunny June 1st when I was teaching sailing to a group of staff at Camp Arnes. After the skills training on land, we placed a rigged boat in the shallow water and each person practiced the basic maneuvers of being skipper and crew. Impulsively, I asked whether anyone would like a short sail out and back, to get “the feel” of sailing. All were eager.

John Jonkers was the second one to take a quick run out with me. We were unsuccessful twice in tacking (turning). That propelled us much further into the lake where the wind was stronger and the waves were higher. I had not intended to go that far from shore. In these heavy conditions we lost control on our third tack and capsized.

I have capsized many times in 30 years of sailing small dinghies. It has never been difficult to get the boat upright, but this time was different. The water was extremely cold and we were in danger of perishing from hypothermia. The wind and waves were getting wilder as we clung to the overturned hull for about 45 minutes. I was realizing that we might not survive this ordeal and because I was the experienced sailor I felt responsible for getting John and myself into this crisis.

Two women who were also learning to sail, came out in a canoe to rescue us but because of the weather conditions it was very difficult to get to us and the rescue itself was very dangerous. It was a miracle that their canoe did not overturn. In fact, without a series of miracles, it would have been impossible. By God’s grace we all made it back to shore where police, firefighters, paramedics and a group of praying people were waiting. My wife was greatly relieved to see me in the bottom of the canoe, because she had given up hope that I was alive.

On Lake Winnipeg conditions can shift very quickly, as I knew well from all my summers on that lake. I also had not paid attention to the temperature of the water which was only 3 degrees because, as I found out later, the ice had left the lake only 4 days earlier! For these and other reasons, I felt responsible that 4 people had faced a life-threatening situation. I had acted impulsively and I should have known better.

I recovered from hypothermia in the hospital but “recovering” from trauma and self-blame took much longer. For the first few weeks after this trauma, I relived the events many times over and at the oddest moments. One day as I was driving the van, I found myself gripping the steering wheel and shouting “No! No!” as I had a flashback. I know many people prayed for me during that time and gradually these flashbacks subsided.

These deep emotional struggles continued and I decided to ask my doctor, James Krahn, for prayer ministry. Years ago James started Wellspring Clinic with the vision for prayer to be integrated into healing. My wife Carolee and I were part of the first group that was trained in TheoPhostic prayer. Later we did the training a second time and also took training in the Immanuel Approach. We also served on Wellspring prayer teams for about five years. These tools have been valuable in the spiritual caregiving we do with Living Free Ministries. Dr. Krahn himself leads a prayer session 2 times a week at the end of his day in the office for patients that he believes could benefit from “prayer therapy” and he allows about 90 minutes for such an appointment.

After listening to my traumatic story of capsizing, Dr. Krahn helped me to unpack my feelings of self-blame. He asked me to recall a time when I had felt safe with Jesus. What came to mind was a beautiful sunny afternoon a few years earlier when I was feeling down and trying to find encouragement in Bible reading. As I sat there in our back yard I was soaking up the warm sunshine and enjoying the beauty of vines, flowers and trees. My Bible was open to Zephaniah 3:17.  I felt God’s love as I read;

“The Lord your God is with you.
He is mighty to save.
He will take great delight in you,
He will quiet you with his love,
He will rejoice over you with singing.”

Dr. Krahn asked me to think of words that would describe that memory: he wanted me to give a title to the event in the back yard. The first word I came up with was “warm,” then I said it felt like an “embrace” from God.

“Warm embrace!” he exclaimed! And so that was what we named the experience. He asked me to shift repeatedly between the trauma and the warm embrace and soon I began to feel God’s presence with us on the overturned hull. God did not chastise or blame me and I was able to release myself from self-blame. I was able to receive His love and acceptance.

Dr. Krahn encouraged me to also do this later on my own, shifting between the trauma and the warm embrace. I did this occasionally and it confirmed the healing that had taken place. The “warm embrace” memory is one that I continue to value and go back to for encouragement in my life.

* I declined to be interviewed by CBC but John took the opportunity. To read his perspective on what happened and to hear the interview click here.